What Role Do Fans Play In A UPS?

Uninterruptible power supply fans play a crucial role in keeping electronic components such as the inverter and rectifier cool enough to operate safely. If the internal UPS fans don’t work properly, these components run in much higher temperatures, which makes them deteriorate far quicker.

Fans are found throughout the UPS in specific places to maintain effective component cooling. In general, the bigger the UPS, the more (and bigger) fans you’ll find.

UPS fans are mechanical by their nature and subject to wear and tear. Sealed bearings inside fans contain grease which dissipates over time, slowing the fan speed, which in turn creates additional heat and noise. Dust in the atmosphere forces the fans to work harder to keep air flowing, while component switching inside the UPS generates significant amounts of heat too. 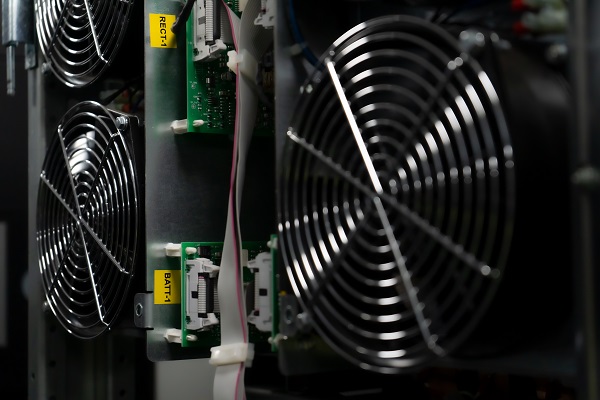 How Long Do UPS Fans Last For?

A UPS fan has a typical service life of 5-7 years if operating in optimum environmental conditions. However, it is advised to proactively replace fans with new before this end of service life to minimise the risk of serious failure.

As they have a similar service lifespan, many UPS manufacturers recommend replacing the fans and capacitors at the same time. This is commonly known as a UPS overhaul and it minimises the likelihood of multiple fans in the UPS reaching their end of service life at the same time.

Individual fan failures can lead to the UPS overheating. In the worst-case scenario, this could cause a unit to transfer to bypass mode, which leaves the critical load unprotected.

Many Riello UPS solutions incorporate smart cooling, where the fan speed automatically adjusts according to the current load - products with this feature include Sentinel Tower, Sentinel Pro, Sentinel Rack, and NextEnergy.